After three workshops series done in Q4 2021 our teaching has reached its conclusion for this year.

Starting at the end of October Mirai’s workshops have provided data scientists with the chance to learn different tools that can be of great use for the daily work in various domains.

This workshop series was held again fully online. Despite limiting the personal interactions, this has allowed us on the other hand to have a diverse and globally spread audience, where a part of it followed us in this journey from the beginning to the end, while others joined us along the way. We are really pleased to have had attendees from USA (East and West), Australia, Germany, Holland, Czech Republic, Italy, UK, Belgium, Denmark, France, Lithuania, Austria, and of course Switzerland. Those coming from countries in different time zones made the effort to stay up till very late or to start their day very early to be able to follow us. A special thank you to all them.

We began with a GIT workshop: whoever develops code within a team must master a tool that allows collaboration, tracks changes and facilitates the coordination and communication with the others.
Hosting services like GitHub, Bitbucket and GitLab can provide a storing space for git-based projects. We have decide to utilize GitHub because it can be freely accessible to all attendees, however also Bitbucket users were happy to participate and learn GIT operations that they can equally use in a different hosting service.
There was quite a high interest on the topic, also among non R users. Everyone should start using version control if not already done.

After a couple of weeks we focused on new R users who like to learn the basics of R, tidyverse universe, and how to build a package properly using usethis and golem packages, including tests (testthat and devtools) and documentation (roxygen2).
The course was very valuable to the audience, but we must say that it was also quite intense to be taken in 3 sections, for this reason we will like to expand it with more material the next time proposing a 4th workshop that could also allow more time for existing topics. R has plenty of important and varied subjects that could be covered also in a start up path. It could be even 6 workshops… or more. 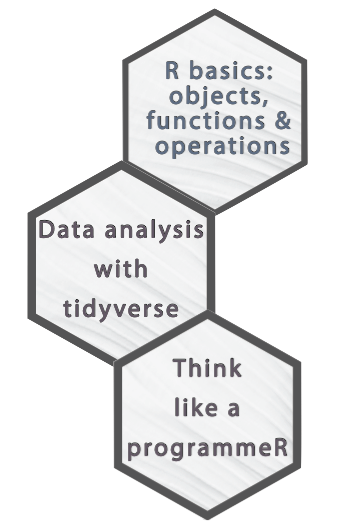 The last learning path was a replication of what done in Q4 2020: we started with building a first simple shiny app to show how the “UI” can interact with the “server” and how to master an important concept like shiny reactivity. After a better insight to UI design we have gone into more advanced topics changing also a big part of our shiny audience: developing an app as part of an package with modules and tests, up to its safe deployment to a productive environment.
Despite being a replication of the previous series, in just few months Shiny added to its offer new tools and options. We must make sure that our material is keeping the pace that Shiny is also having, definitely something challenging but also chance for us to be always up to date with the latest features to be able to propose them to our audience. 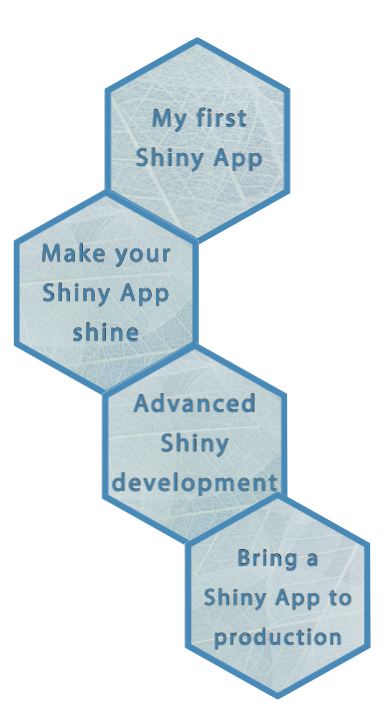 We have done also our best to accommodate different requests, this led to holding workshops privately to companies whose teams could not attend the public events due to dates and time not matching internal schedules or due to very large time-zone differences. What is the best time to hold a workshop for Australia from Zurich? wow…. there are not so many options.